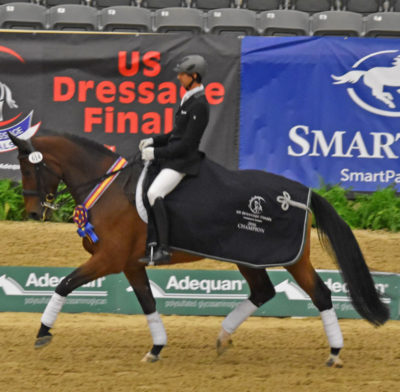 What better end to the 2016 show season but to wrap it up with the US Dressage Finals in Lexington, KY.  Now in its 4th year, this show just gets better and better thanks to an experienced staff, enthusiastic volunteers, and generous supporters.  Thank you ALL who make this show happen!

Michael took three horses to the Finals this year and came home with Top 10 finishes for all three.  Qredit Hilltop (Quaterback-Dream of Glory) placed 7th in Friday’s Intermediate I Championship and 9th in Saturday’s Intermediate Freestyle Championship.  Unfortunately, over the course of the show he was developing a cough and was feeling a bit under the weather by Sunday so we had to scratch the Prix St. Georges Championship.  He traveled home safely and is getting a bit of time off while the cough resolves. Sternlicht Hilltop (Soliman de Hus-Rascalino) placed 2nd in his warm-up class on Thursday and won the Third Level Open Championship on Friday.  This is Ziggy’s second trip to the Finals and his second National Championship!  Lara & Mitch Mitchelson’s Faberge Blue (Contango-Democraat) and Michael made the most of their 80s pop music and captured the Third Level Freestyle Open on Saturday.  You can’t help but smile as you watch this pair together and the music fits perfectly.  All three horses were born here in the US too, which makes their wins even more significant.  Congratulations to their breeders as well – Judy Yancey, Rachel Ehrlich, and Marie Emrey! 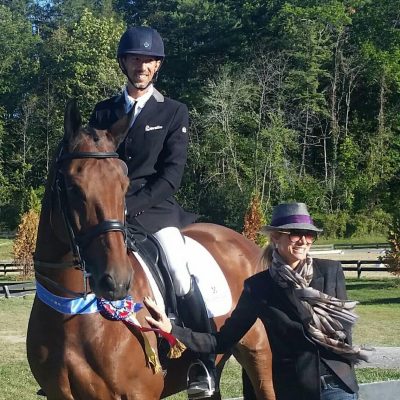 This year, we made the choice to travel to Saugerties, NY for the USDF Region 8 Finals.  The venue is fantastic at the HITS showgrounds and the NEDA team, as always, run a wonderful show. Jess Fay started things out in a great way with a 4th place for Beth Gildea’s Elizabeth’s Elan in their open Training Level test with a 68.6%. Enya’s Championship class was later that same day and her 65.4% put her in the middle of the standings.  We’re very happy with how well this 4-year old filly handled the big environment of the Saugerties venue.

On Friday, Michael started off the morning with a Third Level class for Faberge Blue and Sternlicht. Faberge’s 69.69% put him in a strong 2nd place, just ahead of Sternlicht with a 69.09%. Next came the VERY large Prix St. Georges Championship for both Michael and Jess. Jess and her own Veraki finished in the top half of the class with a 64%. Michael rode Kaja Brix’s Feuerbach to 5th place with a 67.368%, and Qredit was Reserve Champion with a 69.9%.

In Saturday’s Intermediate 1 Final, Jess rode Veraki to a strong finish of 67.5 and earned a wildcard score for Nationals. Qredit was Reserve Champion in the same division with a 73.5%. In a huge Third Level Championship (the class ran all day!), Michael finished 3rd with Sternlicht and 5th with Faberge Blue. Both horses scored over 71% and earned wildcards for Nationals.

On Sunday, the freestyles wrapped up the show. Qredit finished 3rd in the Intermediate Freestyle with a 71%. What a great show he had! Lara & Mitch Mitchelson’s Faberge Blue ended the show perfectly with a win in the Third Level Freestyle with a 73.367%. Congratulations to all the competitors and thank you to the massive number of volunteers who made this show such a success. 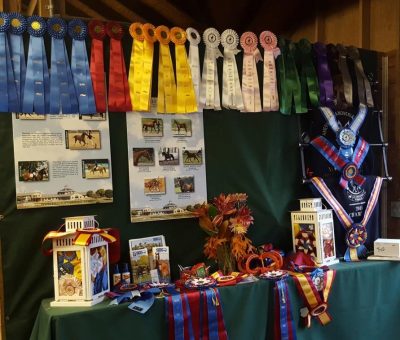 All of us here at Team Hilltop enjoyed another successful year at Dressage at Devon 2016. With the help of King Santacruz, Quinnten and Michael presented a number of Hilltop-sired or client-owned horses to top placings over the course of the week. Despite the usual small bit of rainy weather, we were happy to catch up with clients, friends, and even welcome a few new faces into the Hilltop barns. Devon has consistently been a perfect setting for one of the final big shows of the year, and we extend our gratitude to show management and the volunteers for making all of it possible.

We congratulate all of our owners and clients on their successes at Devon! 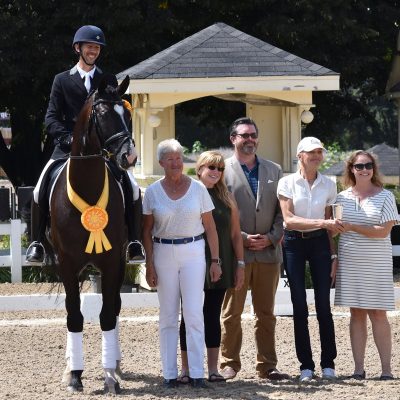 Once again we made the long drive out to the beautiful Lamplight Equestrian Center in Wayne, IL for the Markel/USEF Young Horse Championships. Michael qualified two horses for the Championships this year and we’ll start off with the youngster. David Bowie MF (Don Principe-Rotspon) is bred and owned by Marydell Farm. His walk was the highlight and earned an 8.5 and 9 from the judges! Davey finished in 10th place overall at the USEF Four-Year Old National Championships. Michael agreed with the judges comments that a growth stage made the balance a little less consistent than it was earlier in the season, but the purity of his gaits and work ethic remain 100% solid and he’s looking forward to continuing his development.

Sternlicht Hilltop (Soliman de Hus-Rascalino), owned by Hilltop Farm, had a very good showing in the Six-Year Old Preliminary class Friday morning. His overall score of 7.98 put him in a strong position going into Sunday’s Final. In the Finals, Michael was able to ask Sternlicht for more power and the connection was steadier than in the Preliminary round. The handsome pair finished in 3rd place overall with an 8.028 in the USEF Six-Year Old National Championships. Sternlicht’s breeder, Rachel Ehrlich, deserves a special mention as he was also the Top-Scoring US-Bred horse.

Thank you to Michael’s sponsors, Purina Horse Feed, Hulsebos Saddles, and Cavallo who kept Michael and Sternlicht looking and feeling their best.