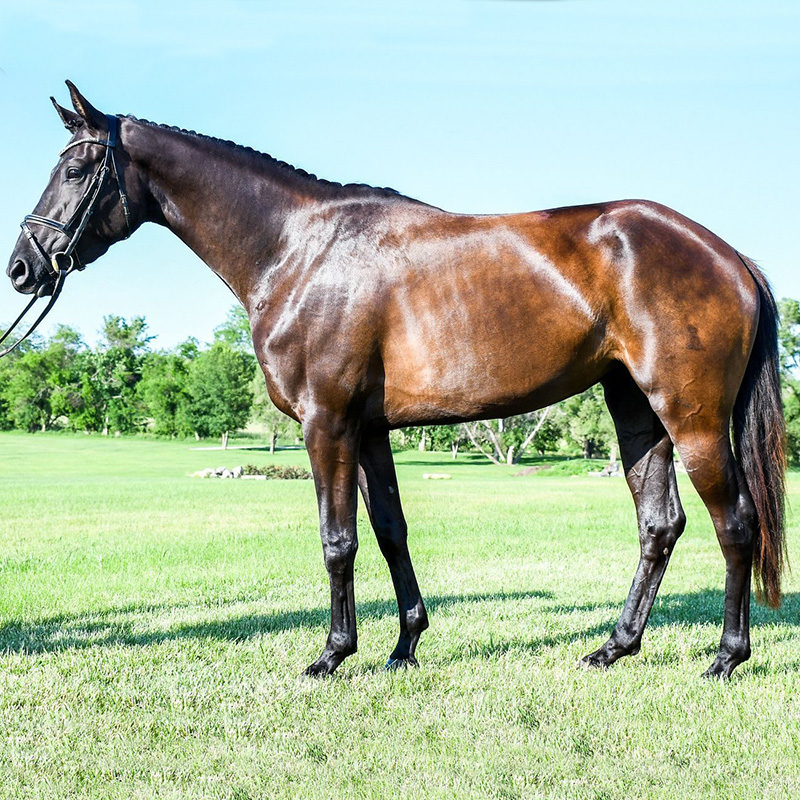 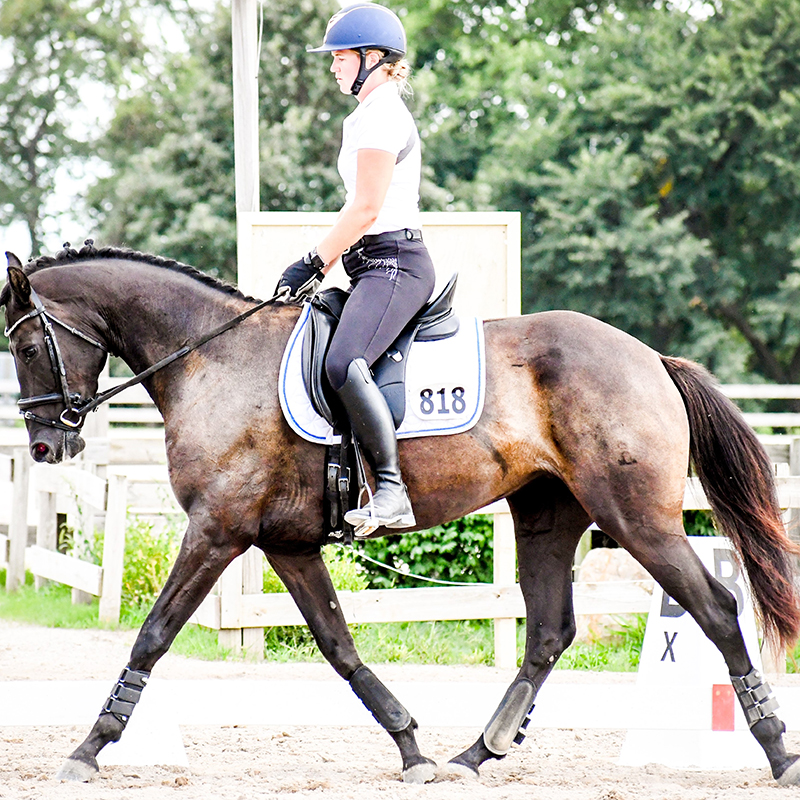 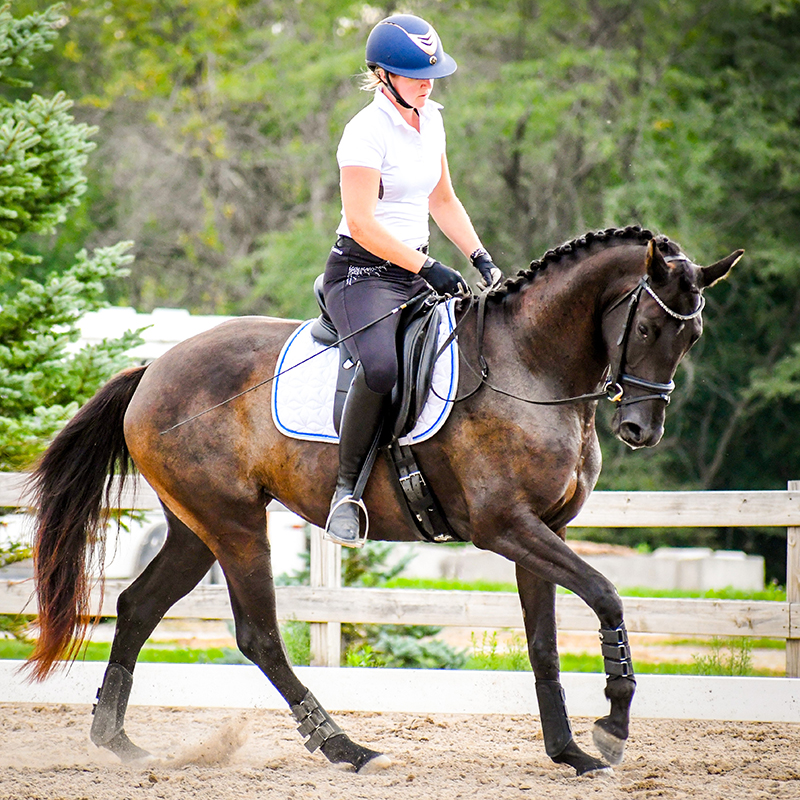 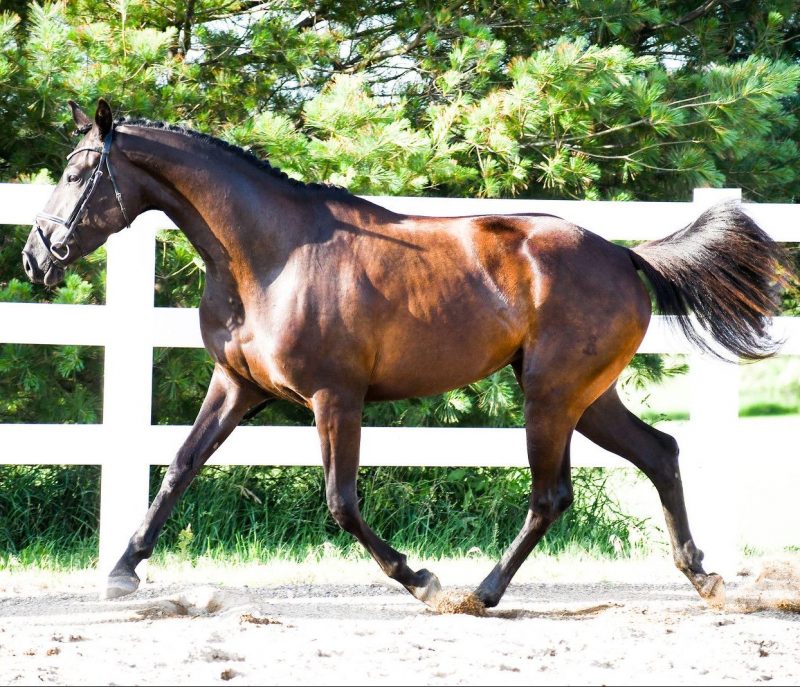 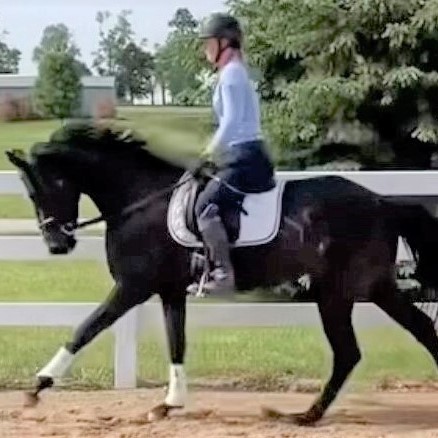 Riviera is a lovely modern type with good top line, correct gaits, and active movement from behind. This year, as a coming three-year-old, she started her training under saddle and, after only two months in professional care, was doing well enough to be ridden by an adult amateur without problem. She continues to improve in balance and contact, pushing from behind, and is able to begin more serious work. She learns fast, has a lovely temperament, and is more than willing to respond to her rider’s requests. She ties, bathes, loads, and stands for the farrier and vet vaccinations. She is currently 15.3 H and will likely reach 16.1 H, the same height as her dam. She will be an excellent ride for either amateur or professional and, with proper training, be able to reach advanced levels in dressage and possibly succeed as a hunter/jumper prospect.

Riviera’s half-brother, Amadeus, competing as Gotham City, in a single year was Georgia H/J Association EOY Champion in two divisions, Pre-Green Hunter and Amateur Owner Hunter at 3’3”. Riviera is ready for USEF Introductory Level tests. Sire Rubinero (Rubinstein x Faola/Ex Libris) stands at Hilltop Farm. From their website: “Rubinstein, Rubinero’s sire, is a legend with over 90 approved sons, more than 170 States Premium daughters, and offspring that have won over 2.5 Million Euro in competition. Rubinero’s dam, Faola, passed her Mare Performance Test with an overall score of 8.36 (out of 10), receiving a 9.0 for her willingness to perform, her canter, rideability, free jumping technique and a 10.0 for free jumping ability. She has produced two licensed stallions as well as successful dressage horses and a 1.40m jumper.” Regarding Rubinero, “At his 70-Day Stallion Test, Rubinero finished 2nd in the dressage phase with a score of 140+ points, and finished in 3rd place overall. His character and rideability earned him perfect 10’s. Rubinero qualified for the Bundeschampionat, was Reserve Champion at Rastede, and quickly moved up to the Advanced levels. Imported to the US in 2013, Rubinero continued his winning ways with his amateur owner, earning scores as high as 72.5% at Intermediaire I. He was the USDF Region 3 Champion at Intermediaire and Reserve Champion at Prix St. Georges.”

Riviera’s dam, Athaena*M* (E.H. Caprimond x Anastazia/Veneziano), was designated a Model Mare at her Trakehner inspection as a 3 yr. old, a coveted distinction. She helped her amateur rider earn her USDF Bronze Medal and received the Oldenburg NA Star Award for Performance, as well as a USDF Performance Award. Her sire, E.H. Caprimond is legendary for his excellent breeding and performance career. In 1995, Caprimond was awarded Elite Stallion status (“E.H.”). In 1998, he was proclaimed Trakehner Stallion of the Year. Until 19 years of age, E.H. Caprimond was successful in Grand Prix competitions and was approved for numerous registries, valued for his many talented, rideable offspring with beautiful conformation. Athaena*M*’s dam, Anastazia, was Trakehner Horse of the Year Champion in the 2-year-old fillies division. She was also Reserve Champion USDF Sport Horse Breeding Horse of the Year in the 2-year-old fillies division. In addition, Anastazia received the Oldenburg Star Award for Performance of Offspring.