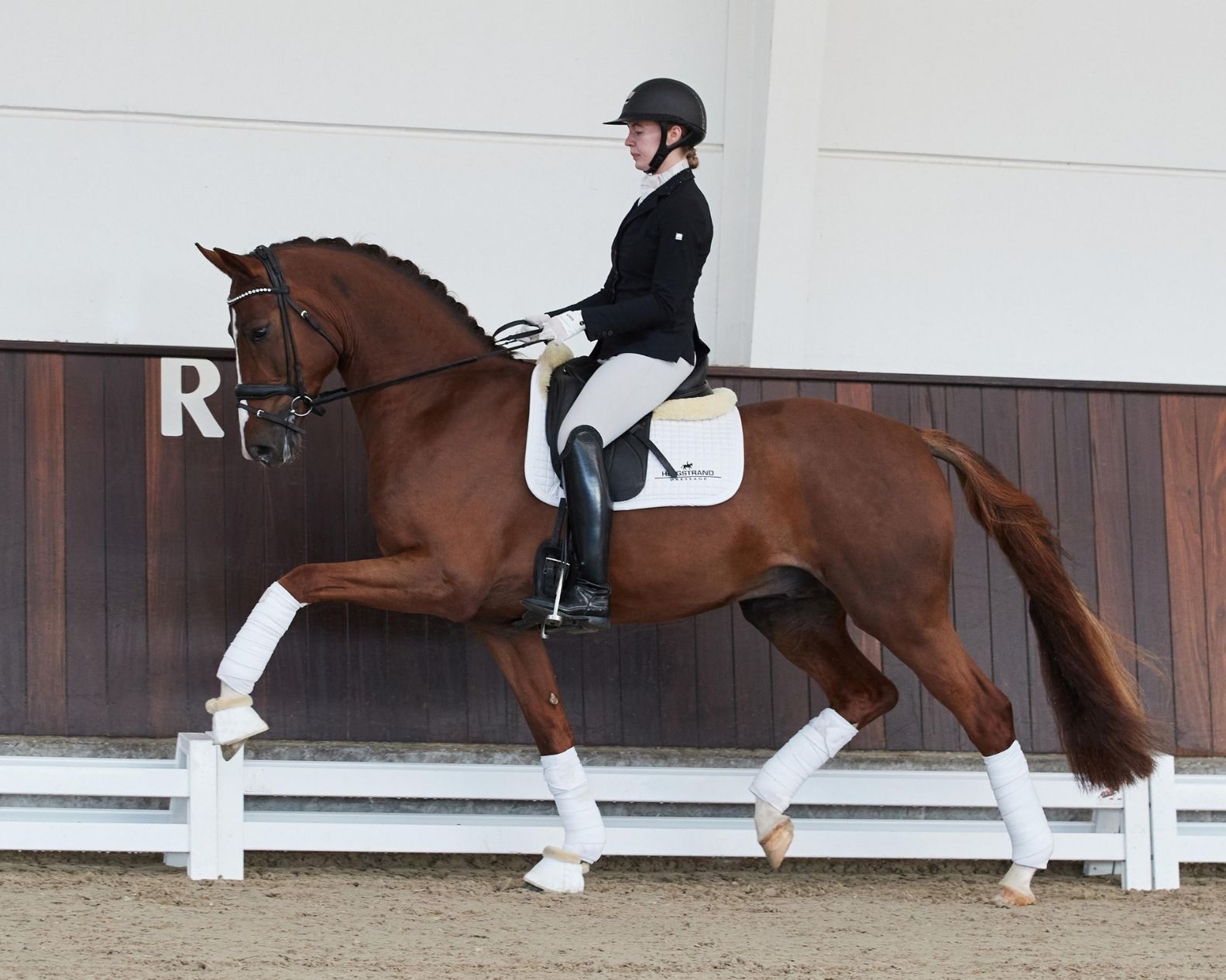 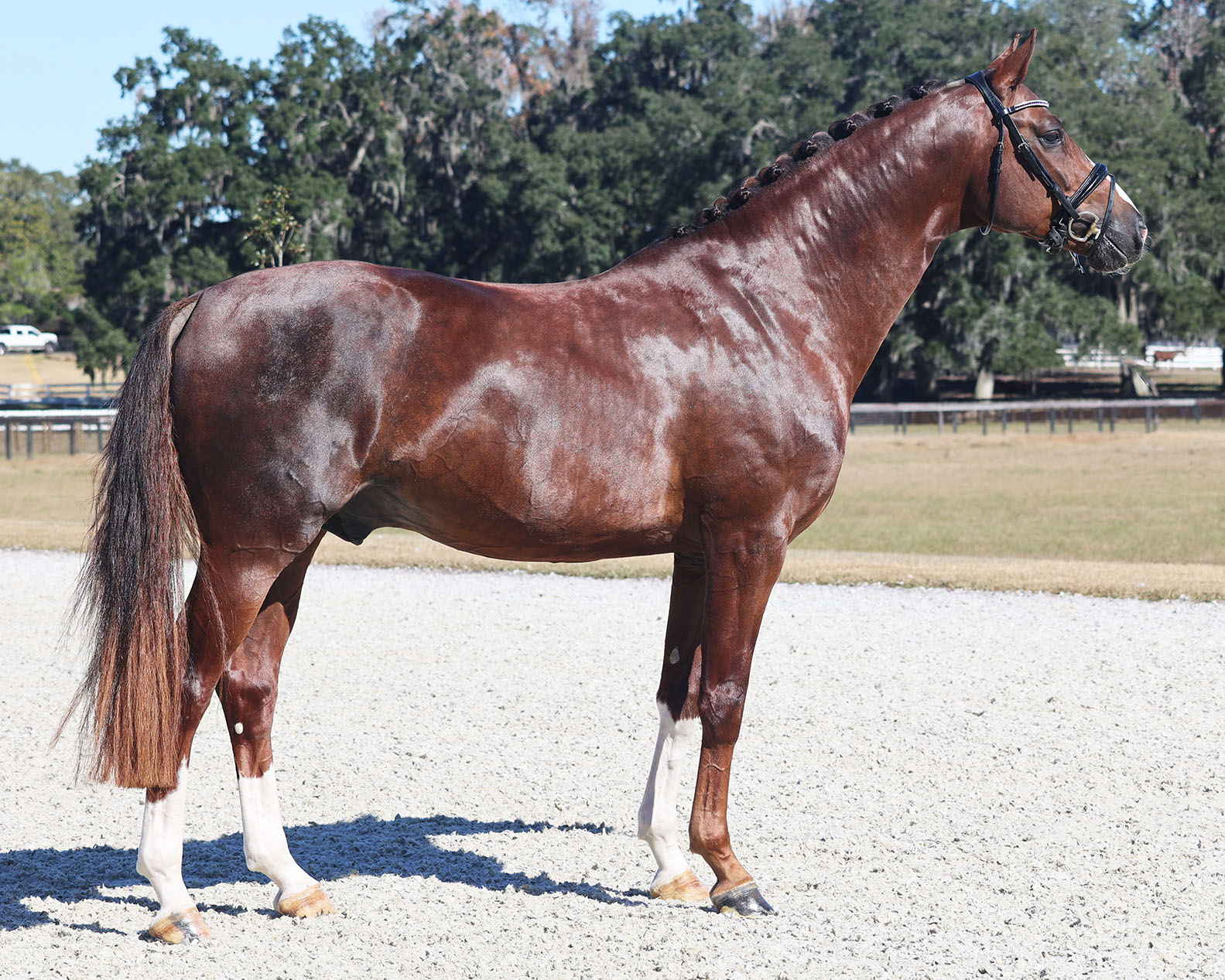 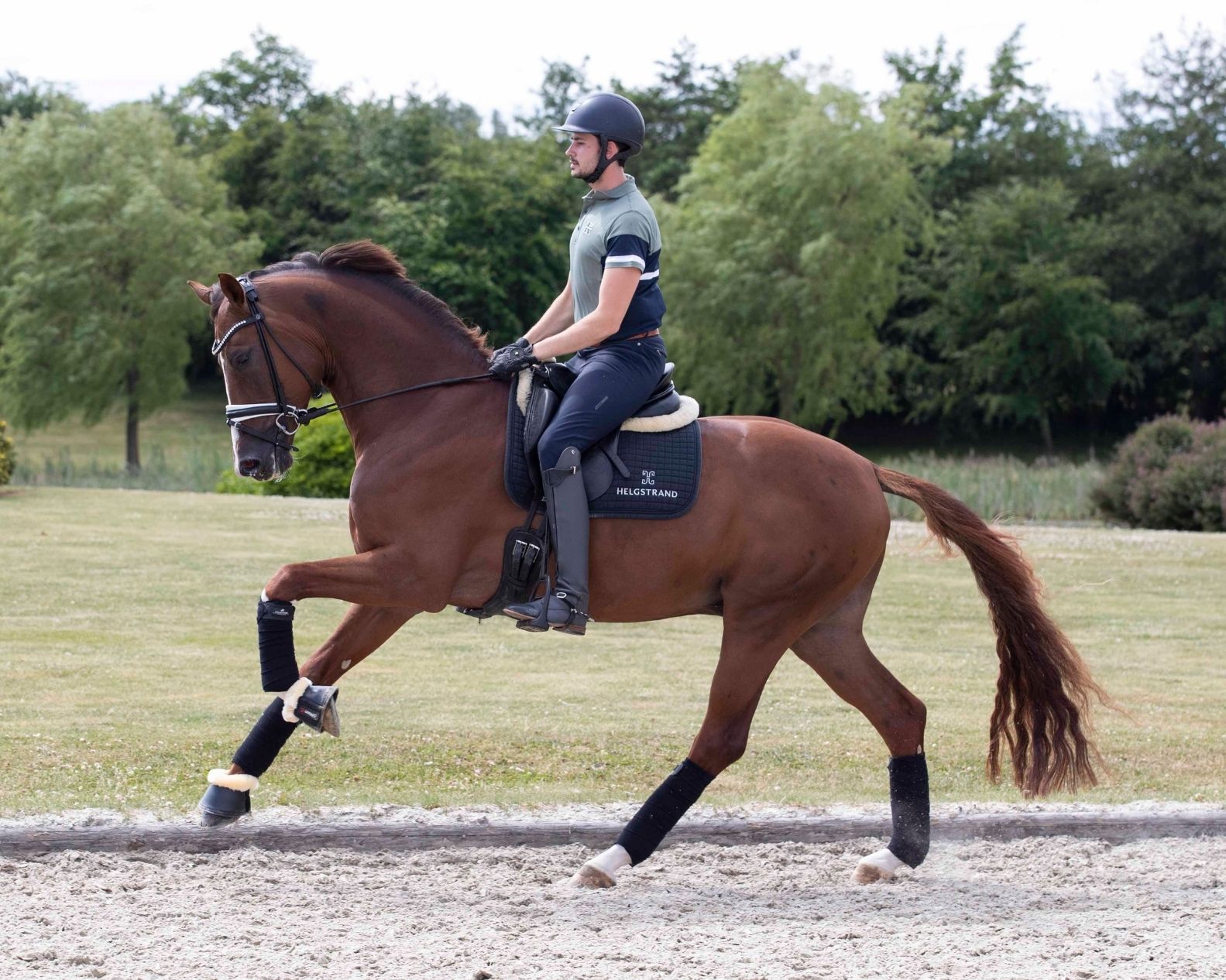 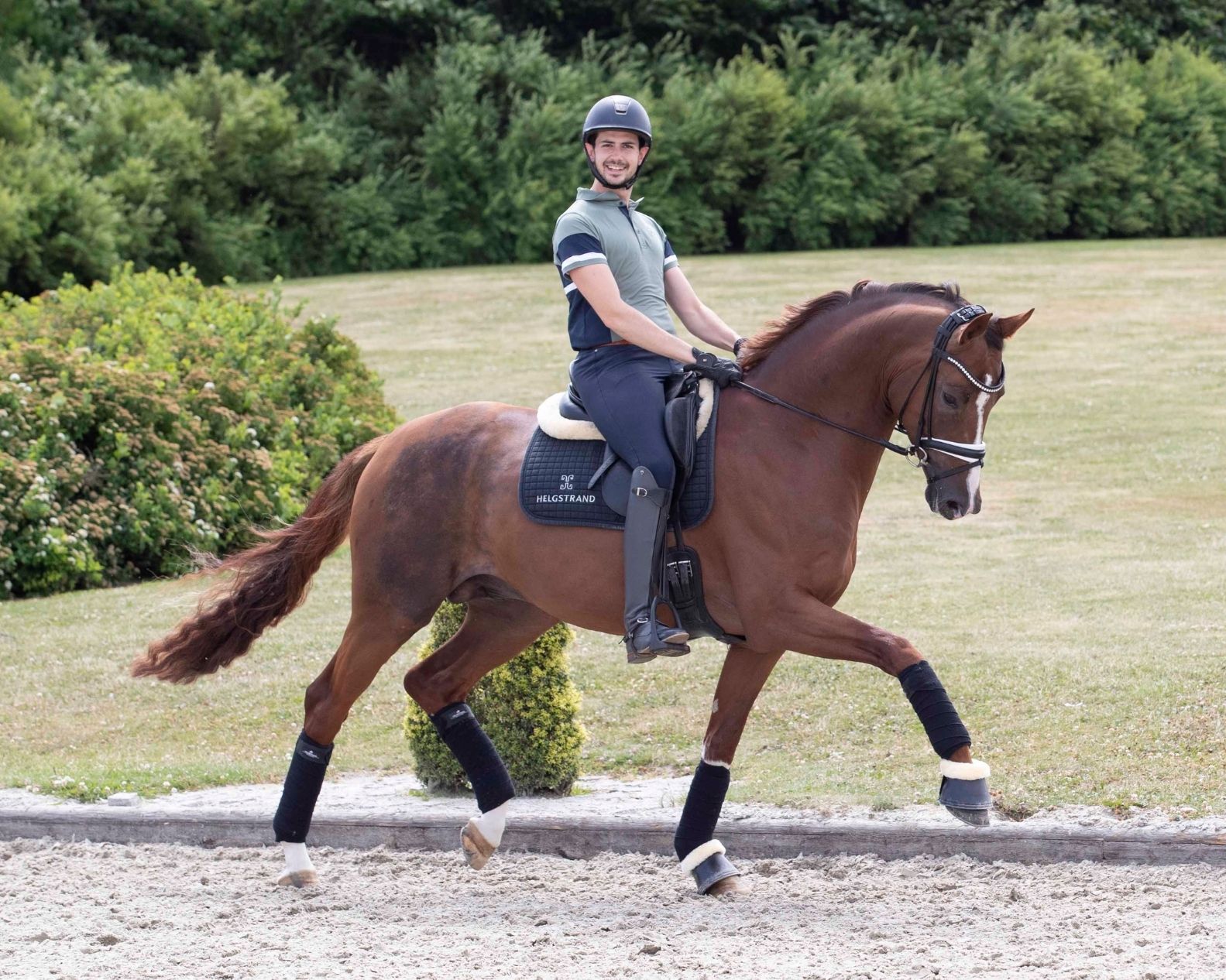 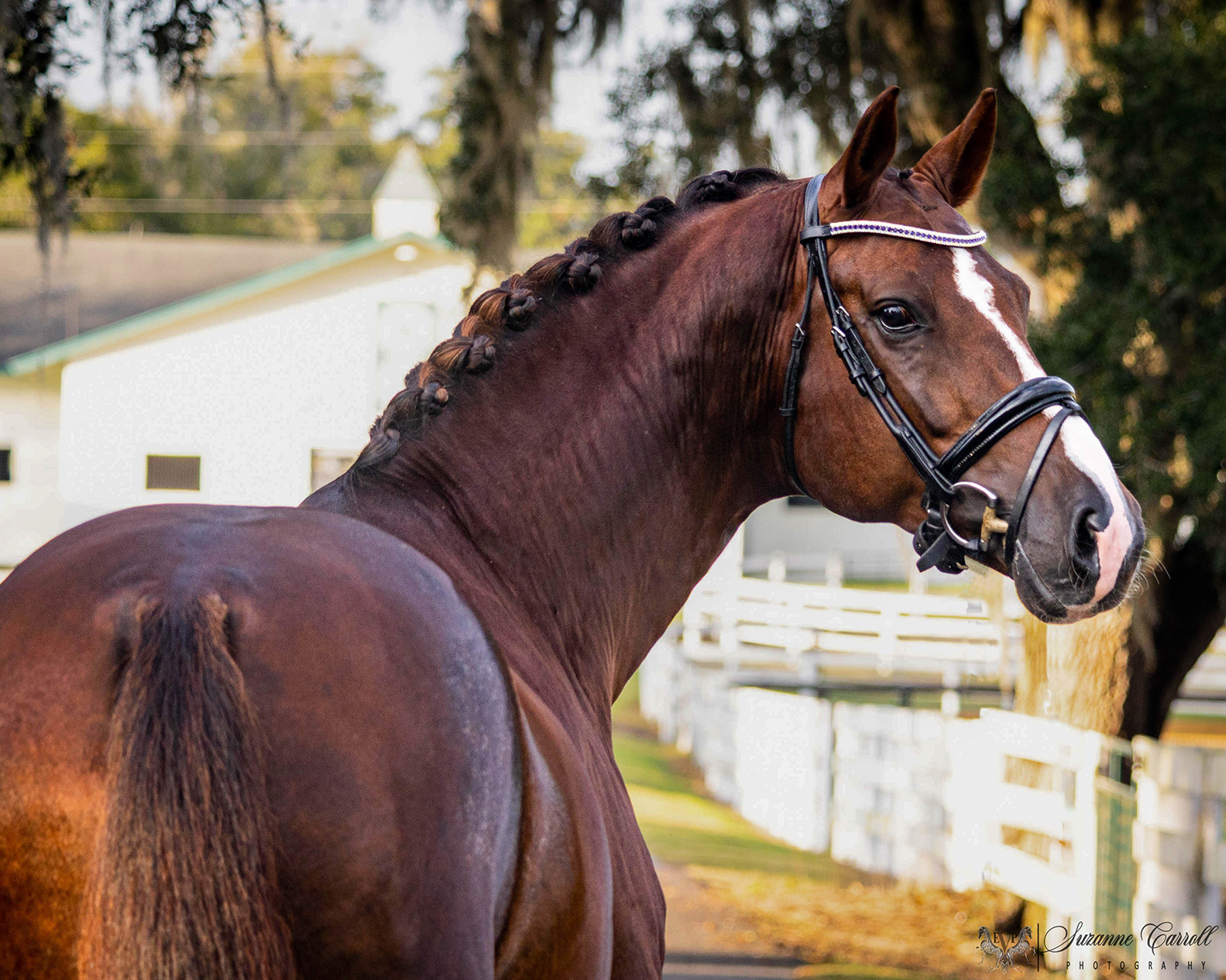 Bernstein instantly captures your attention with his three high-quality basic paces, excellent type, and outstanding temperament. He is a model athlete with an excellent neck conformation, great shoulder freedom, a strong back and a lot of power. The outstanding trot and canter work is always uphill and his clear four-beat walk offers excellent ground cover. Combined with his exciting pedigree that is rooted in an exceptional damline, we believe Bernstein is a fantastic addition for both breeding and sport in North America. Bernstein completed the Danish Warmblood 35-Day Stallion Performance Test, earning multiple scores of 8.0 and a score of 8.5 for capacity from his guest rider. In 2022, he added Hanoverian and Rhineland to his list of approvals as well.

Bernstein’s sire Bonds was named Oldenburg Champion Stallion in 2015 and earned impressive scores of 9.12 and 9.28 at his sport tests in 2017 and 2018. Bonds currently competes at advanced level and has five licensed sons to his credit. Grandsire Benicio, was winner of the Bundeschampionat, earned an unprecented 9.88 in dressage at this stallion test, and developed into an accomplished FEI horse. He is highly regarded as a sire with 25 licensed stallions and is highly ranked on both the German FN and Hanoverian Verband Dressage Sire Ranking lists.

Bernstein’s dam Sunshine M is by the influential stallion Quaterback. Quaterback has numerous offspring competing internationally at Grand Prix, including Hilltop Farm’s Qredit, and he is currently ranked #5 in the world on the WBFSH Dressage Sire Rankings. Sunshine M’s damline is the exceptional Elfenblume line from Germany. We know this family well as the special mares Elfenfeuer and Raureif also stem from this line.

The first Bernstein foals arrived in Europe in 2022 and were well received by breeders. As anticipated, they consistently show his beautiful type and expression. Bernstein’s first breeding season in North America has been very successful, with numerous breeders across the country expecting Bernstein foals out of a wide variety of mares.

$850 Per Dose
Details: Cooled or frozen semen sold by the dose with no live foal guarantee.

Bernstein will be available via cooled semen April 11th, 2023 through June 30th, 2023 for collections Monday through Friday. Stallions are only collected at the request of the breeder or their veterinarian, click here for instructions to Request A Semen Shipment.

REMINDER: The lab is closed and stallions will not be collected on Monday of Memorial Day weekend, and July 4th.

Cooled Semen distribution for Bernstein is handled by Peterson & Smith Equine Hospital. The Distribution Fee must be paid in advance of each shipment by check or credit card. 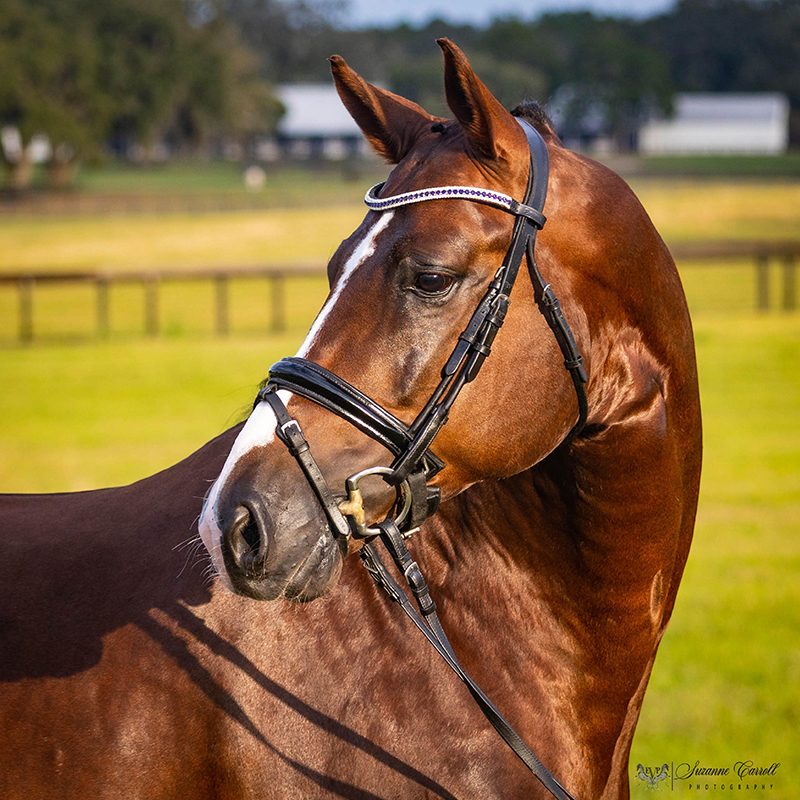