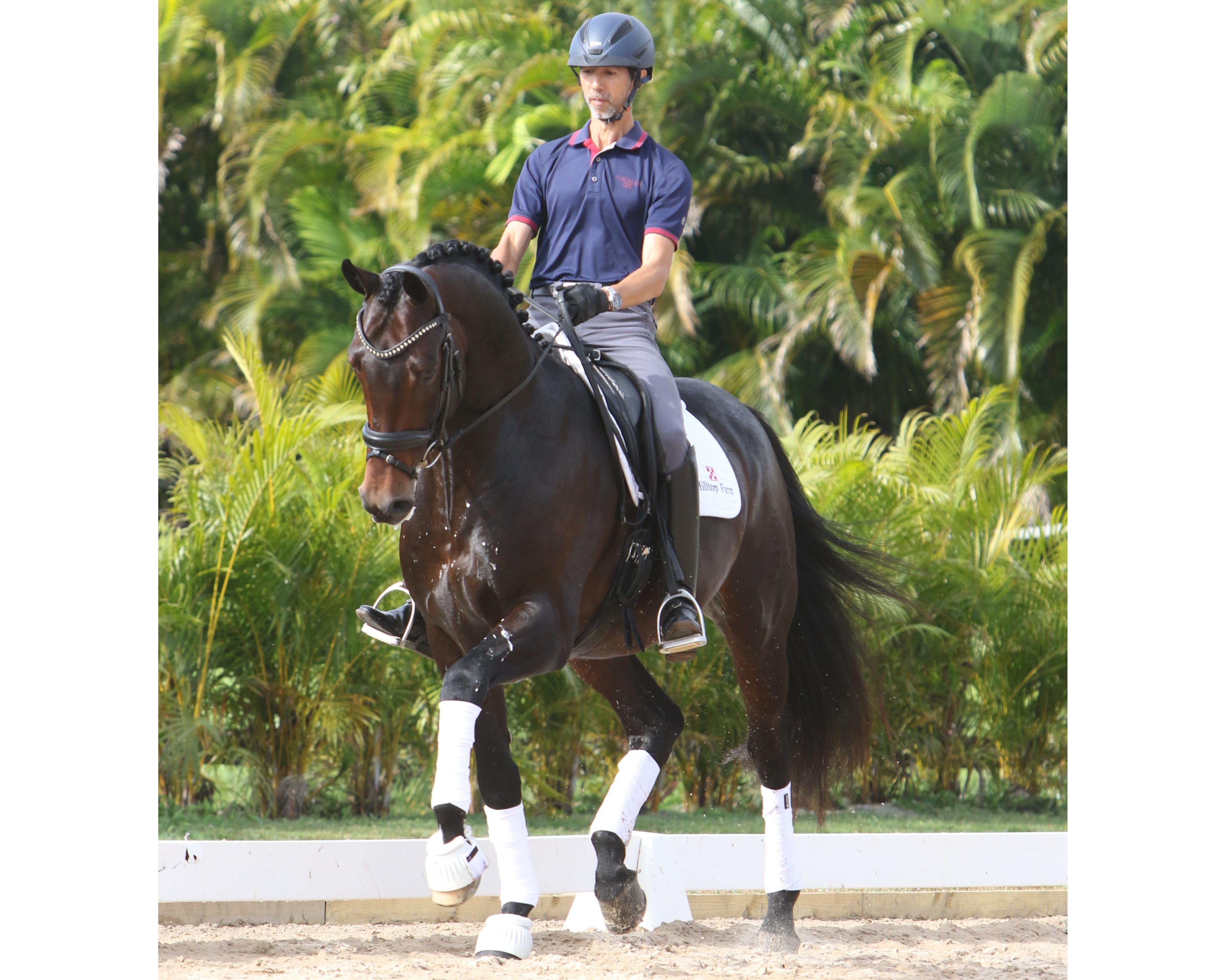 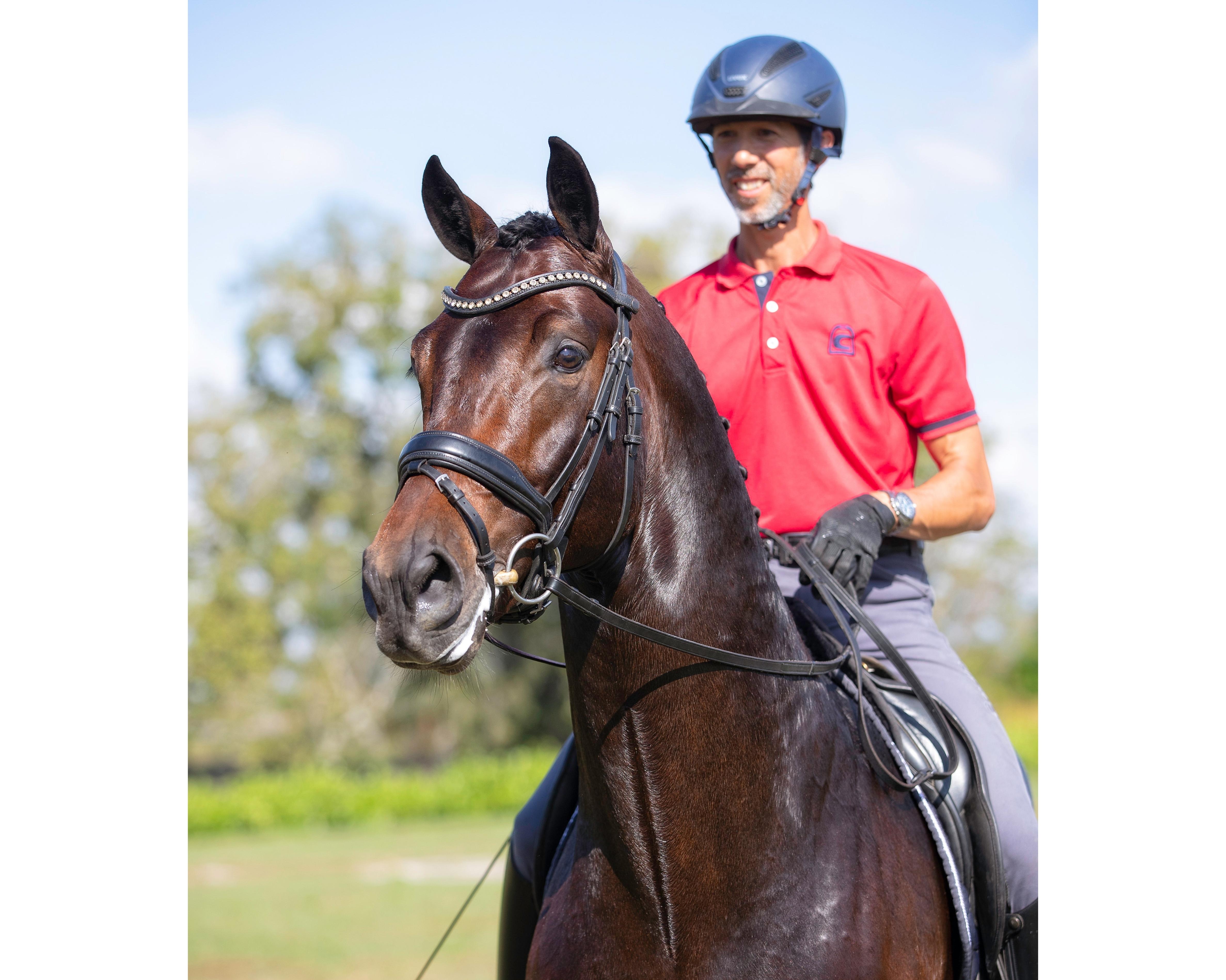 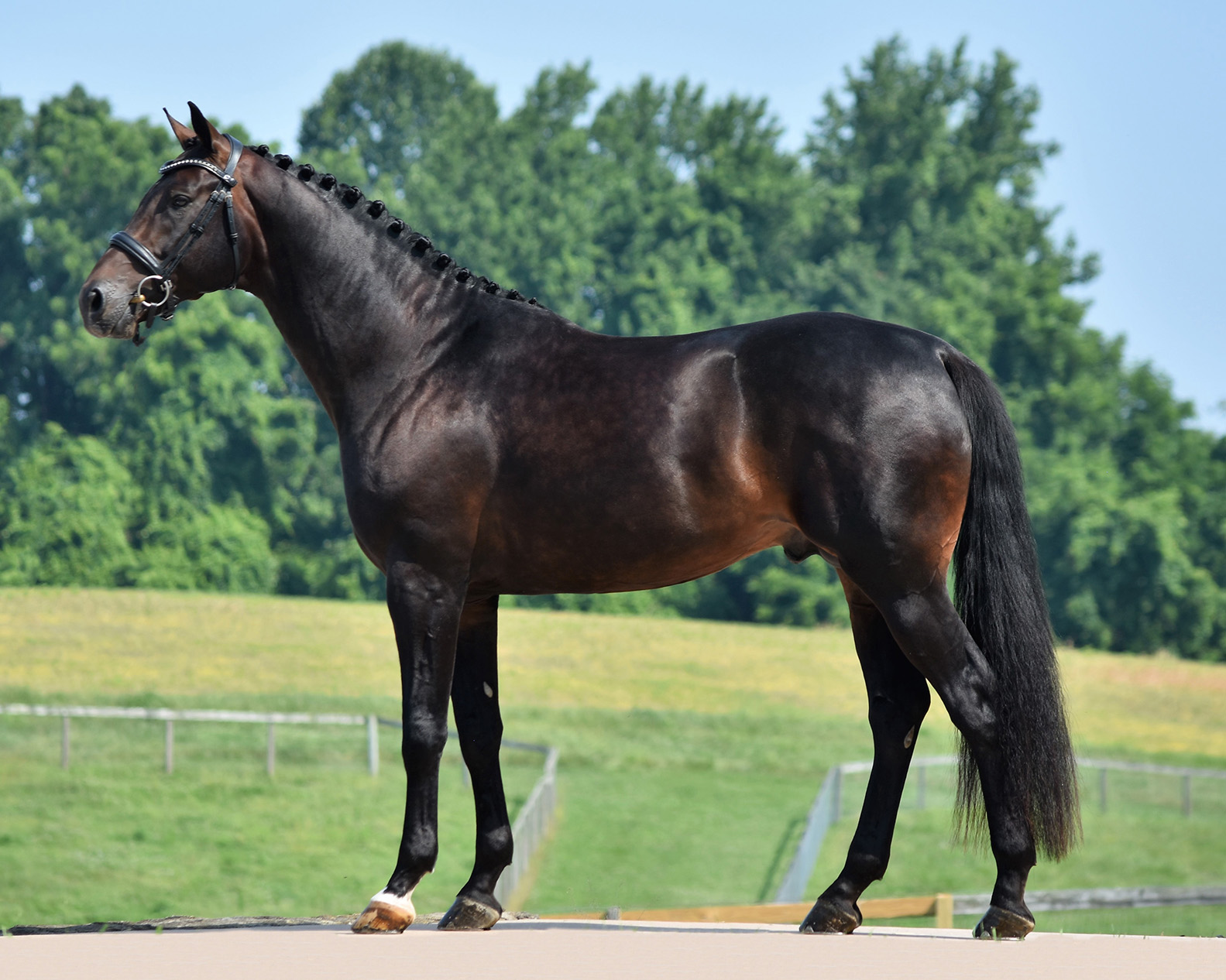 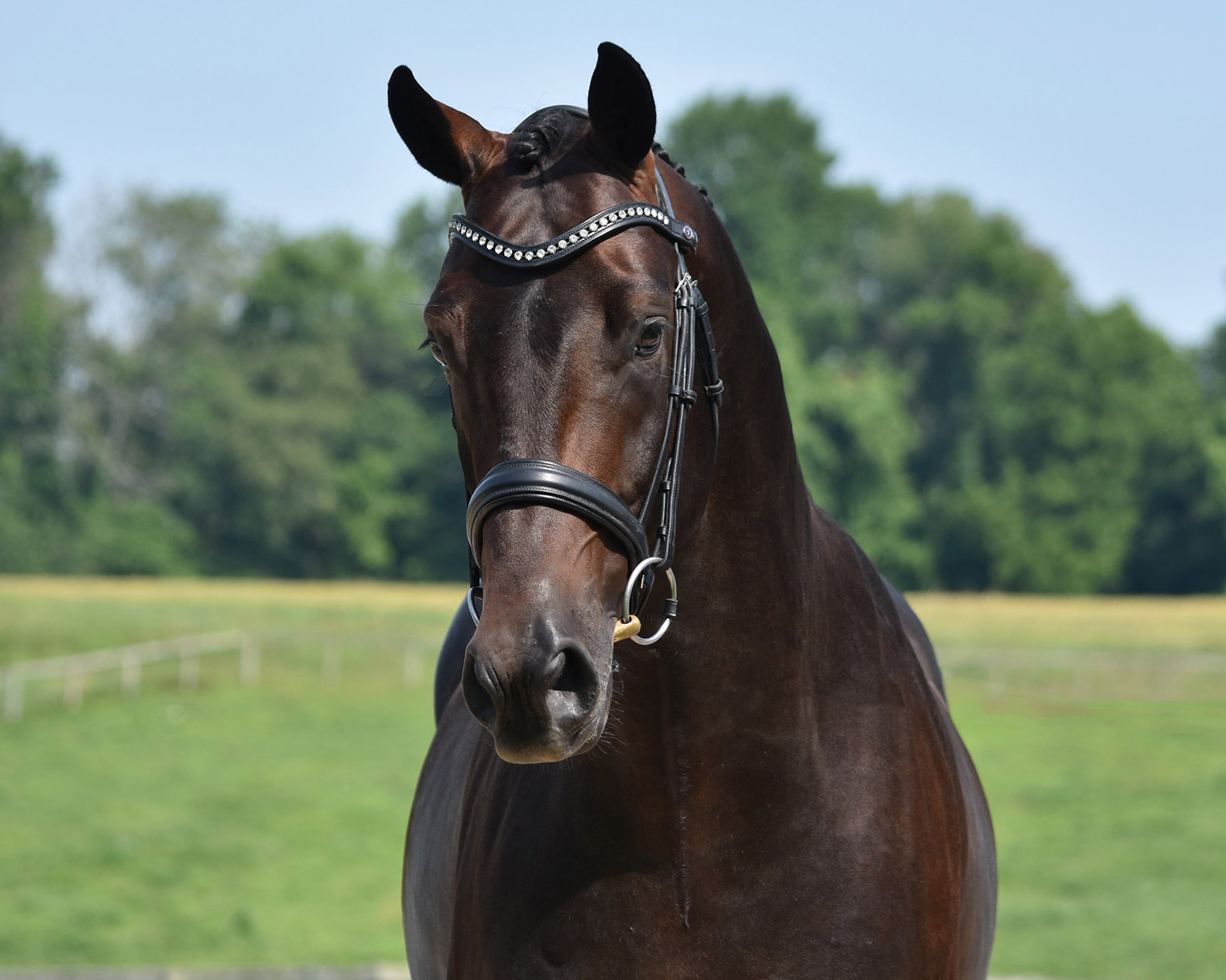 Louisville was an early standout winning the Colts of 2017 and the prestigious Dressage at Devon Foal Championship. In 2021 at the East Coast NA Stallion Sport Test, Louisville finished 2nd overall, earning scores of 9 for his canter and rideability and an 8.5 for his trot. In 2022, Louisville finished 3rd at the NA Stallion Sport Test and once again the scores reflected the highlights of his trot, canter, and rideability. The 2022 show season also earned Louisville many accolades with a median score over 74%, he was Reserve Champion for USDF All-Breeds at First Level, Reserve Champion at the USDF Region 1 Finals, made his 2nd Level debut with a score of 73.6%, and was named First Level Champion at the US Dressage Finals.

Louisville’s sire, Lord Leatherdale is by Lord Loxley who was a Bundeschampionat winner and Silver Medalist at the World Young Horse Championships. Lord Leatherdale has sired multiple PAVO Cup winners, Young Horse World Champions, and international Grand Prix horses. Louisville’s dam had a successful competition career that included the USEF Intermediaire Championships and Grand Prix wins. Her sire Negro is one of the most proven sires for production of Grand Prix offspring, including Valegro, Nintendo, and Fendi T. Great-grandsire Fruhling was an Advanced Level showjumper whose influence is well-established with 10 approved sons.

The quality of Louisville’s first foal crop is apparent, with multiple Premium and Top Foals to his credit. They’ve also earned top ribbons at Breed Shows around the country. We’re consistently see his expressive gaits, strong stamp on type, and outgoing personality.

$750 Per Dose
Details: Cooled or frozen semen sold by the dose with no live foal guarantee.

$1,500 1-Season
Details: 1-Season multi-dose agreement. Rather than a rebreed year in 2024, this contract option offers a discount valued at 50% of the total breeding fee paid on this contract off a new 1-Season breeding agreement to any Hilltop Farm stallion during the 2024 season should your mare fail to conceive and maintain a pregnancy for 60-days.

EVA: Negative, Vaccinated Annually
This stallion has been tested for and vaccinated against EVA.  Given his negative status, it is not necessary to vaccinate your mare prior to breeding to this stallion
WFFS Tested: Negative N/N
This stallion is not a carrier of Warmblood Fragile Foal Syndrome (WFFS) and may be breed to both non-carrier and carrier mares without risk. For additional information on WFFS visit the Warmblood Fragile Foal Syndrome page on our website.
Color Tested: Homozygous Black E/E
Louisville does not carry the red gene. He will not produce chestnut offspring.
Blood Type: Aa Qabc Ua
Louisville’s Blood Type is Aa Qabc Ua.
D-OC Predicate
Louisville has earned the KWPN D-OC predicate, his genetic predisposition for OC health is equal to or better than the average population.
Additional Testing Through Etalon Equine Genetics
Louisville has DNA on file with Etalon Diagnostics and is included in the Build-A-Horse module. With submission of your mare’s DNA, Etalon can provide feedback on potential characteristics of a foal resulting from Louisville and your mare. Use the code HILLTOP10 to receive a 10% discount off genetic testing through Etalon Equine Genetics.

Louisville will be available via cooled semen March 13th, 2023 through July 31st, 2023. Stallions are only collected at the request of the breeder or their veterinarian, click here for instructions to Request A Semen Shipment.

REMINDER: The SBS lab is closed and stallions will not be collected on Easter Sunday, Monday of Memorial Day weekend, and July 4th. 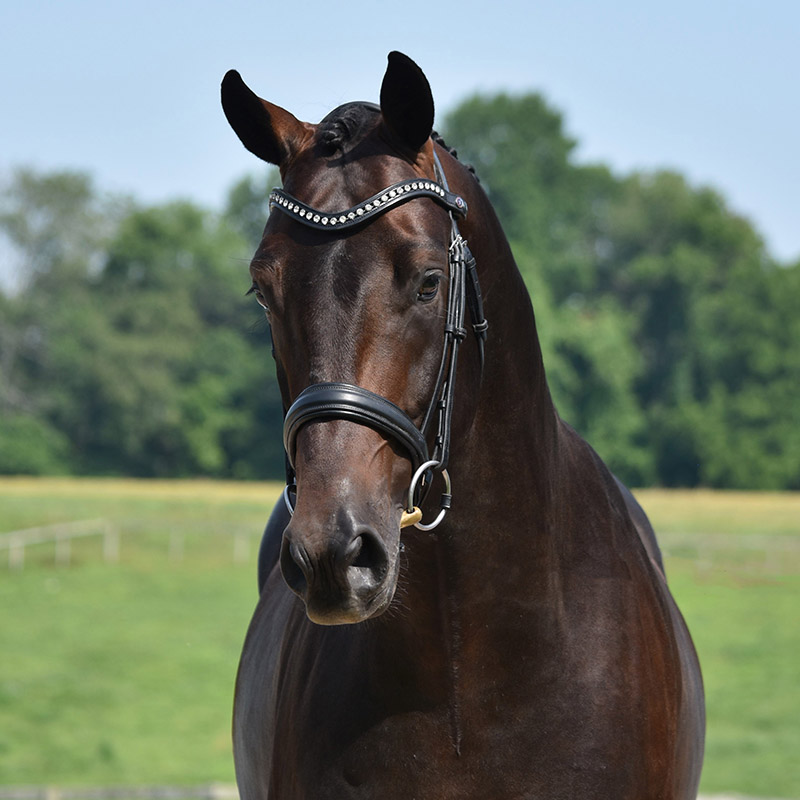