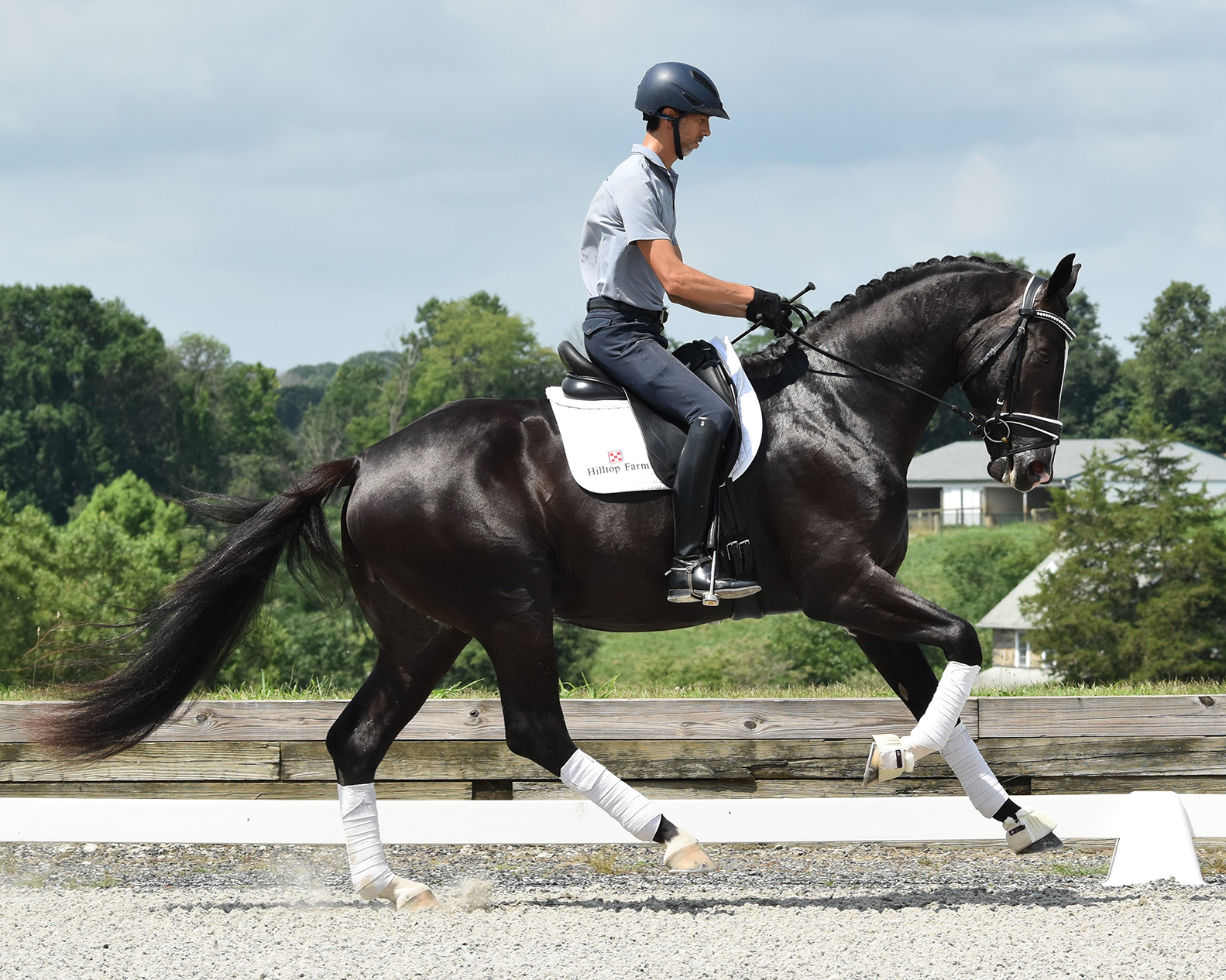 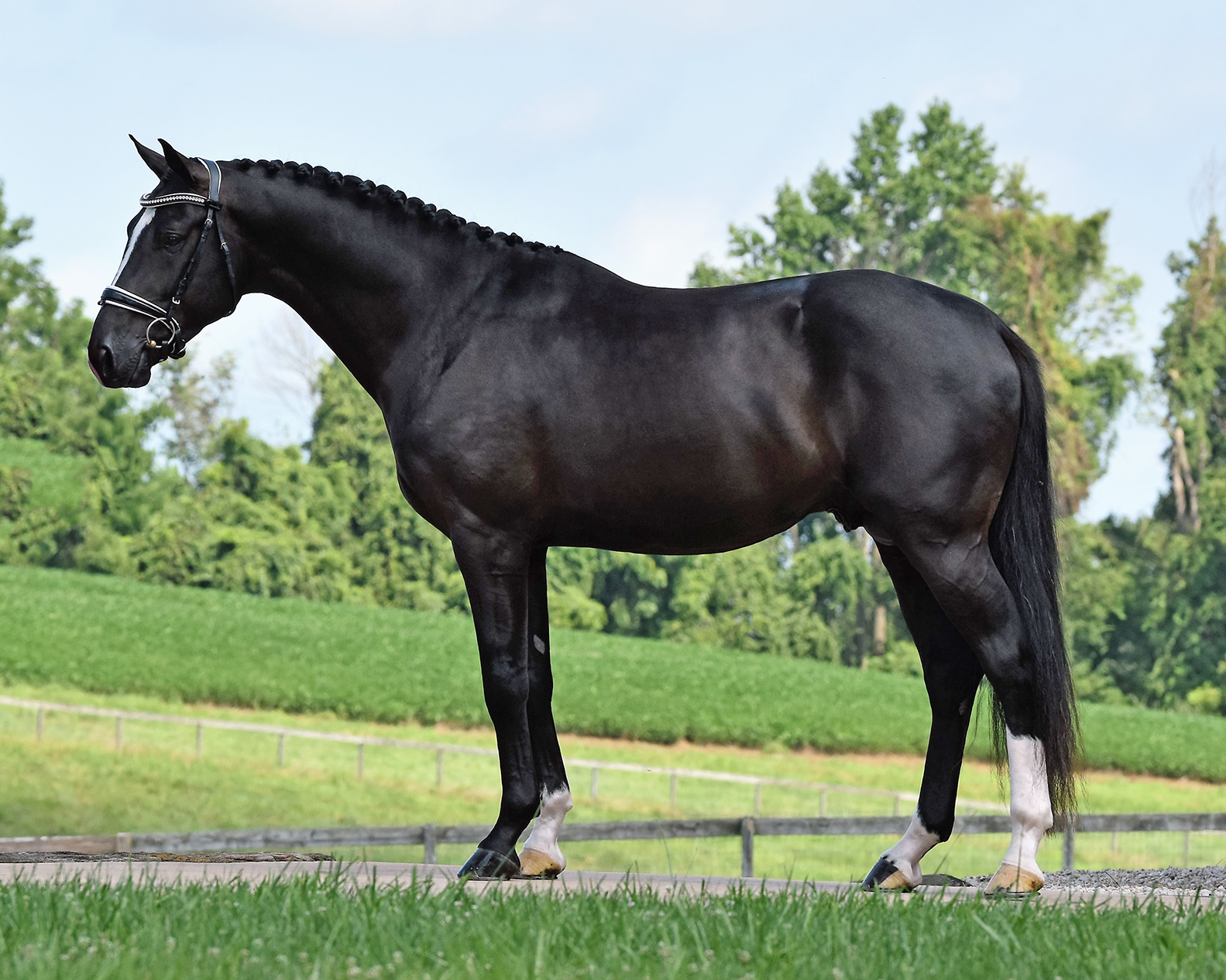 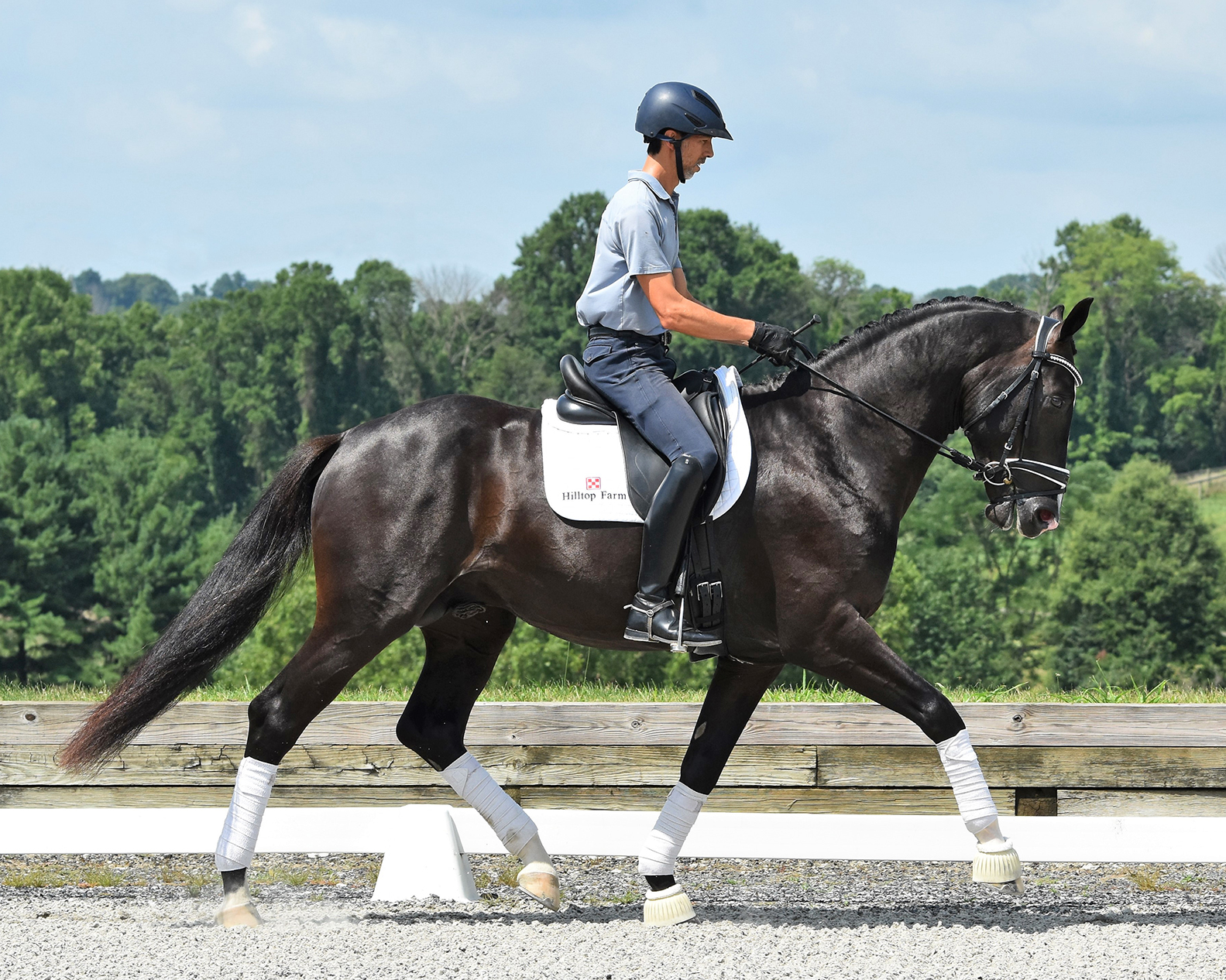 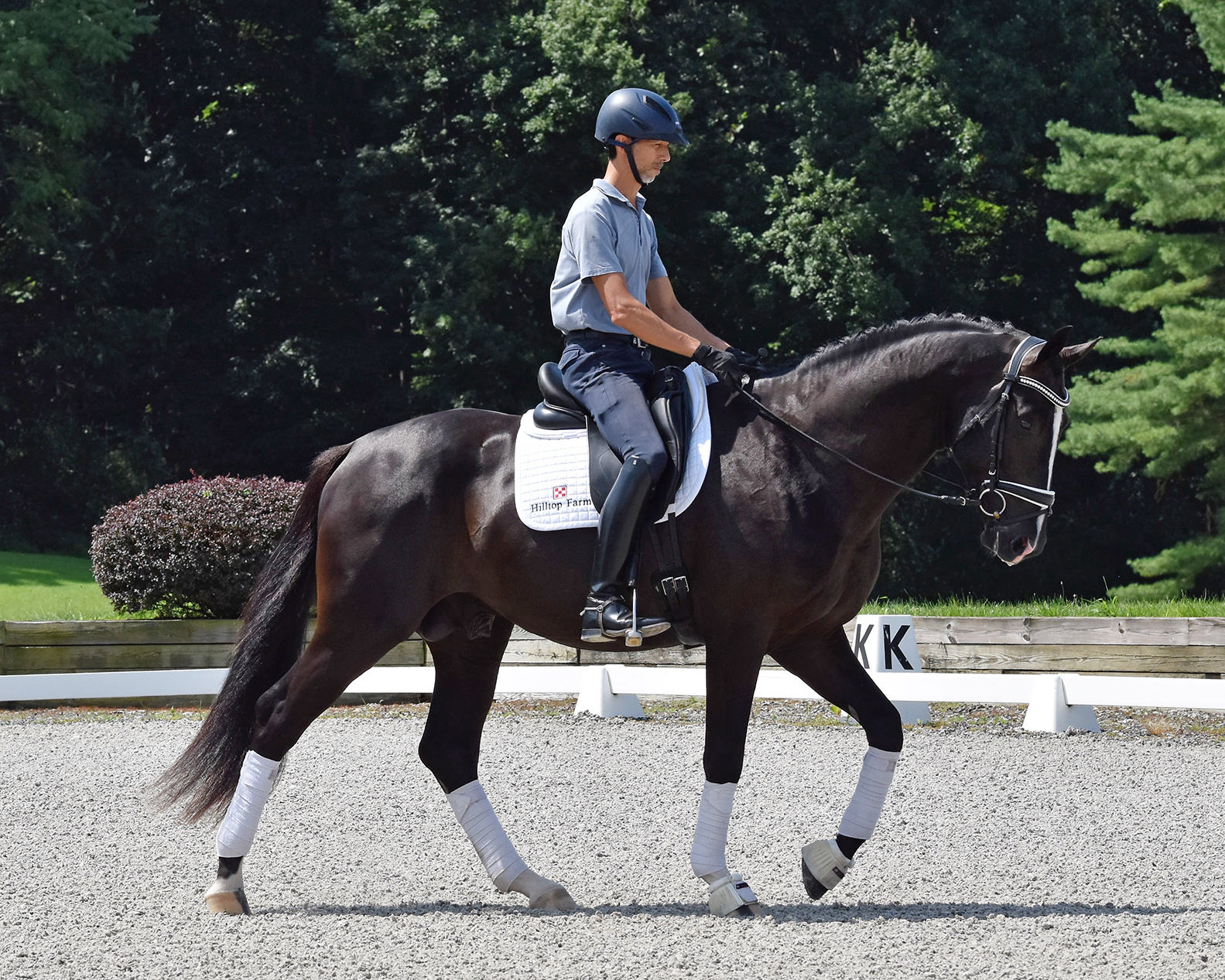 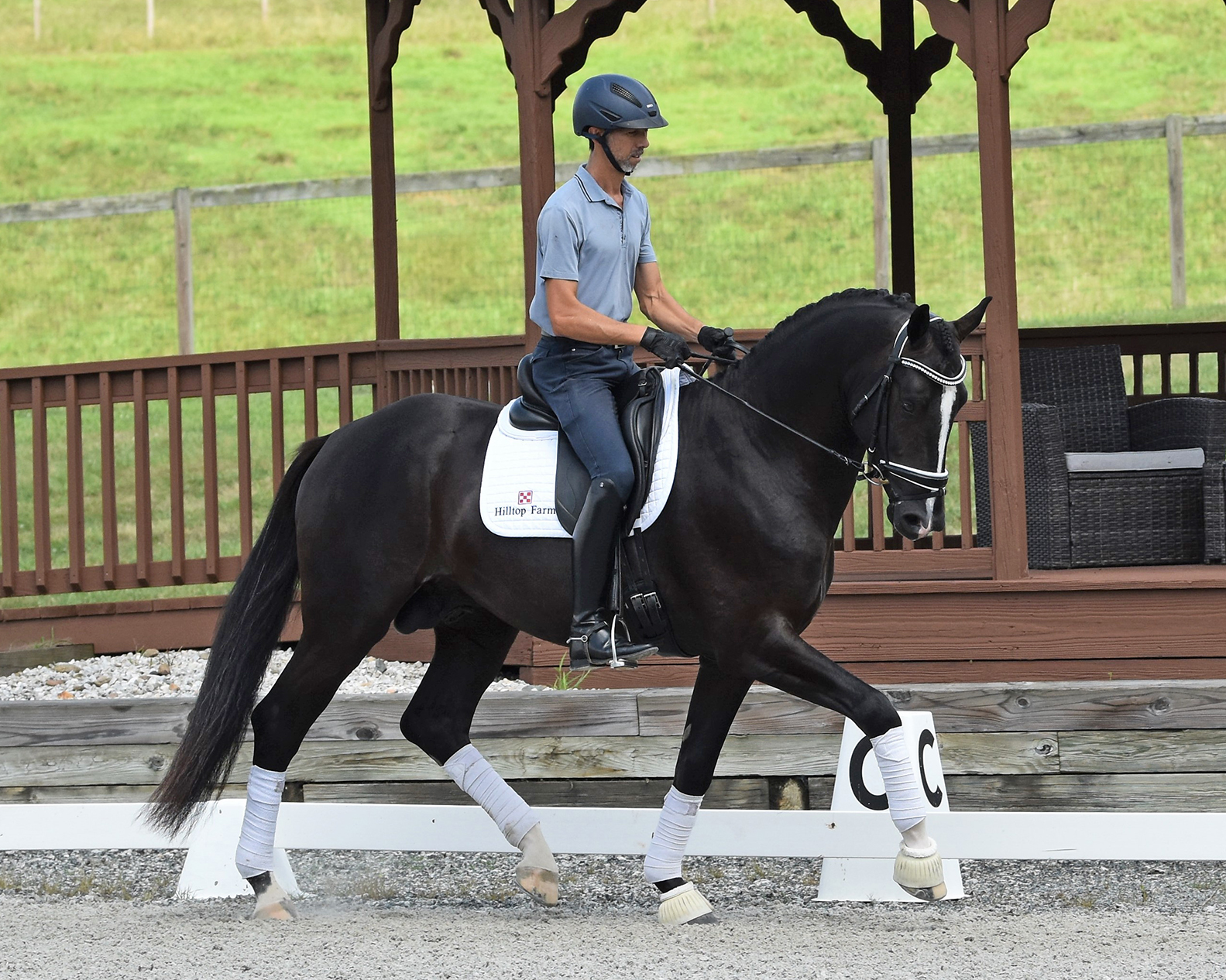 An exciting new addition for 2023! The newly licensed Denmark HTF offers a pedigree aimed for the upper levels with both parents proven Grand Prix competitors. Denmark’s sire Desperado NOP has been a star from the young horses classes through the FEI levels. He was a PAVO Cup winner as a 4-Year Old and was a top ten finisher at the World Championships for Young horses in both his 5 and 6-Year Old years. He now competes successfully at Grand Prix with scores as high as 85% under top rider Emelie Scholtens. Desperado has also made a significant mark as a sire, with 17 licensed sons to date including the popular young stallion Ibiza, many top sales results, and offspring winning from the young horse divisions and into the FEI arena.

Denmark’s dam Uforia (reg. Unicum-D) was both a successful Grand Prix horse and exceptional producer. Uforia has produced the licensed stallion Louisville and her oldest offspring, sired by Qredit, made his FEI debut in 2022 and won the Prix St. Georges at the CDI3* in Devon, PA. Uforia’s sire Negro is one of the most proven sires for his record of Grand Prix offspring, including the Olympic horses Valegro, Elegance, and Fendi T as well as two-time World Young Horse Champion Kjento. Uforia’s great-grandsire Fruhling was an Advanced Level showjumper whose influence is well-established with 10 approved sons.

With a proven pedigree and exceptional character, Denmark holds much promise for the future. At his Hanoverian inspection, particular highlights included a 9 for his exceptional walk and scores of 8 for both canter and rideability. He is already licensed with the AHS, ARS, ISR/Oldenburg, and Westfalen registries and we look forward to his sport debut in 2023.

$600 Per Dose
Details: Cooled or frozen semen sold by the dose with no live foal guarantee.

$1,000 1-Season
Details: 1-Season multi-dose agreement. Rather than a rebreed season in 2024, this contract option offers a discount valued at 50% of the total breeding fee paid on this contract off a new 1-Season breeding agreement to any Hilltop Farm stallion during the 2024 season should your mare fail to conceive and maintain a pregnancy for 60-days.

EVA: Negative, Vaccinated Annually
This stallion has been tested for and vaccinated against EVA.  Given his negative status, it is not necessary to vaccinate your mare prior to breeding to this stallion
WFFS Tested: Negative N/N
This stallion is not a carrier of Warmblood Fragile Foal Syndrome (WFFS) and may be breed to both non-carrier and carrier mares without risk. For additional information on WFFS visit the Warmblood Fragile Foal Syndrome page on our website.
Color Tested: Homozygous Black E/E, Homozygous a/a
Denmark does not carry the red factor gene. He will not produce chestnut offspring. Denmark is homozygous a/a, meaning he has the potential to sire black offspring.
Additional Testing Through Etalon Equine Genetics
Denmark has DNA on file with Etalon Diagnostics and is included in the Build-A-Horse module. With submission of your mare’s DNA, Etalon can provide feedback on potential characteristics of a foal resulting from Denmark and your mare. Use the code HILLTOP10 to receive a 10% discount off genetic testing through Etalon Equine Genetics.

Denmark will be available via cooled semen from March 13th, 2023 to July 31st, 2023. Stallions are only collected at the request of the breeder or their veterinarian, click here for instructions to Request A Semen Shipment. 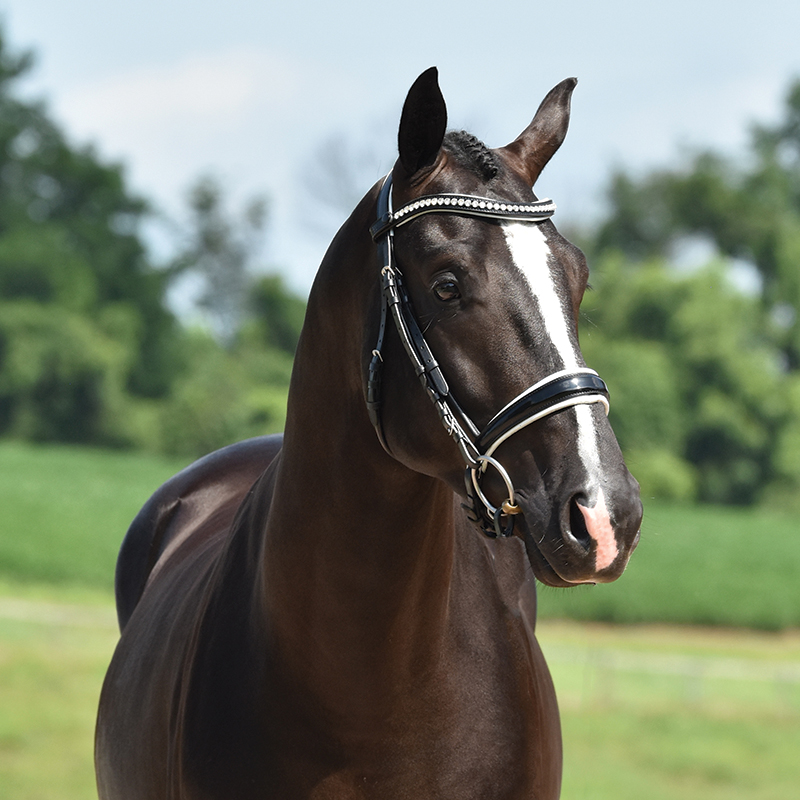