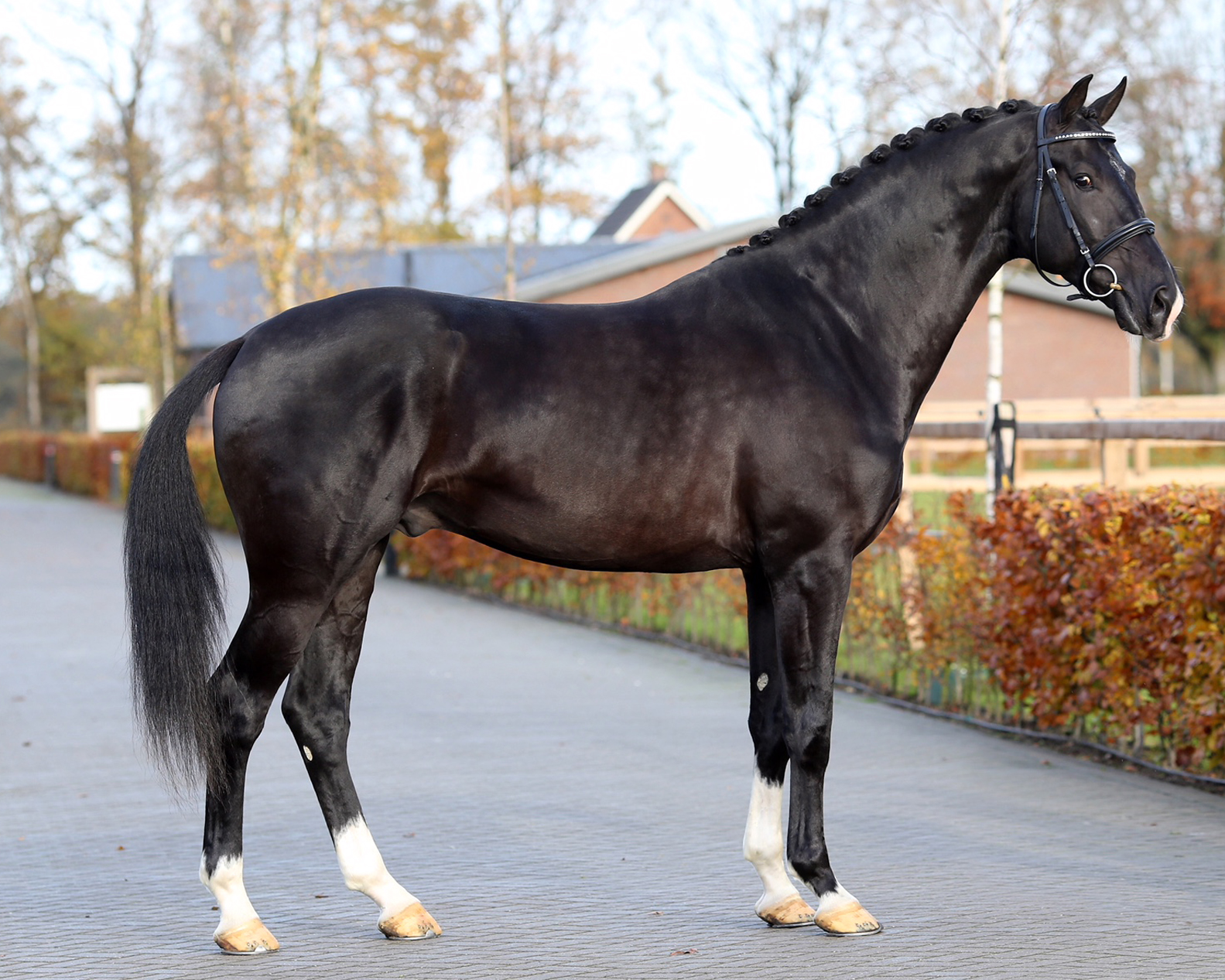 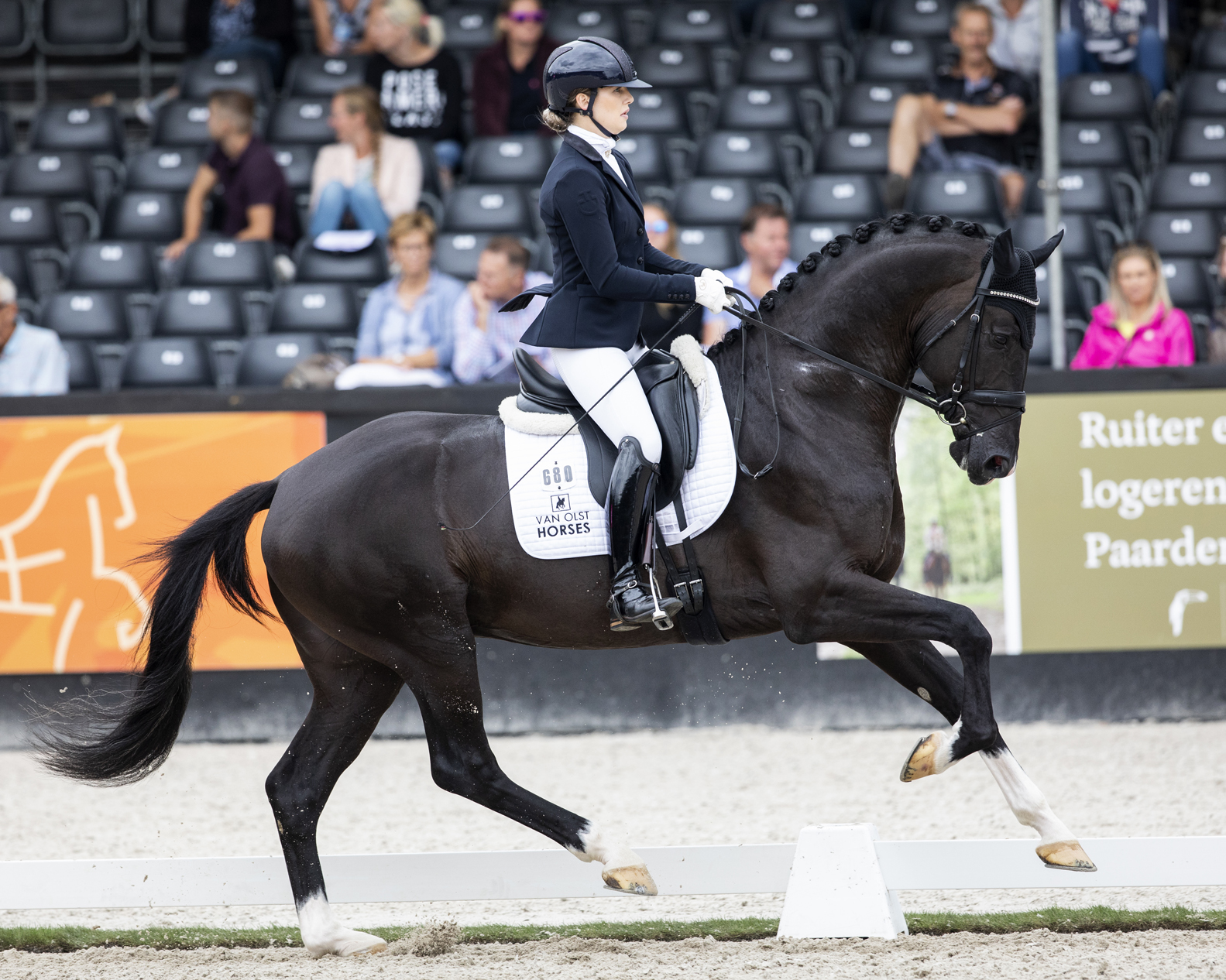 The eye-catching black stallion Jayson has much to offer beyond just his good looks. He also has an FEI pedigree filled with top performers that will catch any dressage breeder’s attention. Under Hans Peter Minderhoud, his sire is Johnson who had an impressive career including the World Equestrian Games, Olympics, and European Championships. As a sire, Johnson is proving equally impressive and is currently ranked #2 in the world on the WBFSH Dressage Sire rankings, one placing ahead of his sire. Johnson’s sire, Jazz, is ranked #1 in in the KWPN ranking lists for dressage sires in 2021 and 3rd in the WBFSH Dressage Sire rankings.

Jayson’s dam, Zamora B, has already produced 2 approved sons as well as an Elite and Ster daughter.  Zamora’s oldest offspring Esperanto was winner of the USDF Region 1 Intermediate I Open Championship and Reserve Champion at Prix St. Georges in 2021, after making his FEI debut at the CDI1* at Dressage at Devon. Zamora’s sire is the revered stallion Negro.  An impressive FEI competitor himself, he has an incredible record for siring Grand Prix horses, including Olympic and World Cup Champion Valegro.

Jayson convincingly won his initial NRPS Stallion Performance Test and went on to complete the KWPN Short-Term Performance Test earning multiple scores of 8 or above and 9’s for rideability and attitude. Jayson placed 6th in the PAVO Cup Finals in 2018 and 11th in 2019. He was also an Alternate for the WBFSH Young Horse Championships. We’ve been very pleased with Jayson’s early foals and look forward to the start of their performance careers in the coming years. The KWPN recommends Jayson for breeders looking to add size, rideability, and impulsion to the gaits.

$1,400 1-Season
Details: 1-Season multi-dose agreement. Rather than a rebreed season in 2023, this contract option offers a discount valued at 50% of the total breeding fee paid on this contract off a new 1-Season breeding agreement to any Hilltop Farm stallion during the 2023 season should your mare fail to conceive and maintain a pregnancy for 60-days.

EVA: Negative, Vaccinated Annually
This stallion has been tested for and vaccinated against EVA.  Given his negative status, it is not necessary to vaccinate your mare prior to breeding to this stallion
WFFS Tested: Negative N/N
This stallion is not a carrier of Warmblood Fragile Foal Syndrome (WFFS) and may be breed to both non-carrier and carrier mares without risk. For additional information on WFFS visit the Warmblood Fragile Foal Syndrome page on our website.
Color Tested: Untested
Jayson has not yet been color tested.

Jayson is not available via cooled semen. Please see Frozen Semen for shipping costs and details on Jayson’s frozen semen. 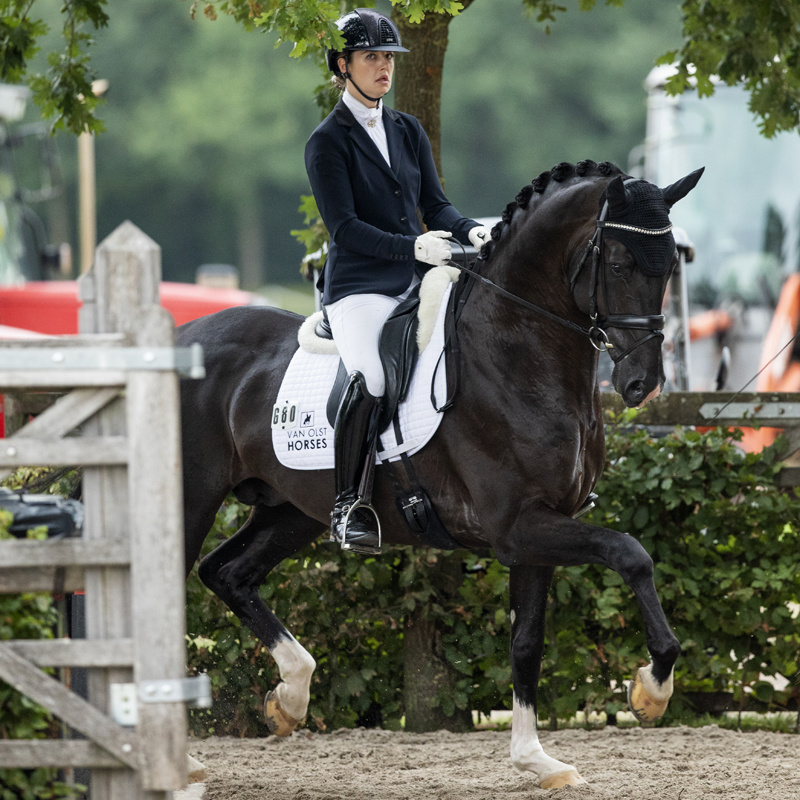